Cricket fans have begun sharpening their knives against the Indian cricket captain Virat Kohli, head coach Ravi Shastri and the BCCI’s Committee of Administrators (CoA) chairman Vinod Rai for the national team’s dismal showing in the World Cup semi-final. India lost to New Zealand by 18 runs as the team failed to chase a meagre total of 239 runs despite boasting to have the best batting line-up in the World. 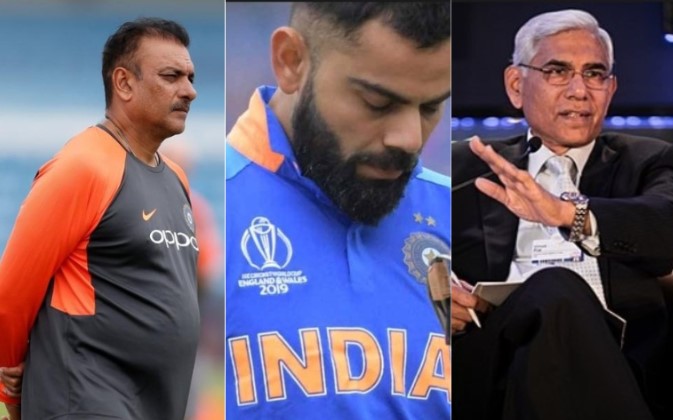 Many fans took to social media to demand the ouster of Virat Kohli for his controversial selection of the playing XI all through the competition. Kohli had controversially kept Mohammed Shami out of the semi-final match despite the cricketer from Uttar Pradesh scalping 14 wickets in just four matches including a hat-trick and a five-wicket haul.

Kohli had not included Shami in the first four matches of the competition and had said that the pacer will be in the team when there’s an overcast condition, which allows him to bowl lethal swinging deliveries. Kohli had opted for Bhuvaneshwar Kumar, who had conceded 73 runs in India’s last league match against Sri Lanka.

Curiously, inspite of the overcast conditions during the semi-finals, Shami had to spend his time on the bench the 12th man.

Many experts were baffled by Kohli’s choice to go for the semi-final with just two recognised fast bowlers. After former India captain Sourav Ganguly questioned Shami’s exclusion, noted commentator Harsha Bhogle too agreed with him, “Like @SGanguly99, I admit I am surprised by the dropping of Shami. He takes wickets upfront and if you do, the death overs aren’t as critical. India batting very deep with Jadeja at 8 but it is a big call to leave out Kuldeep against a team he has done well.”

Like @SGanguly99, I admit I am surprised by the dropping of Shami. He takes wickets upfront and if you do, the death overs aren’t as critical. India batting very deep with Jadeja at 8 but it is a big call to leave out Kuldeep against a team he has done well.

1) Virat Kohli should step down from captaincy.

#ThankYouMSD: I don’t blame Dhoni. To be blamed are the 3 Idiots – Shastri, Kohli & MSK Prasad for the 3D performance with 4 WKs! @imVkohli doesn’t have the ability to win the IPL once as captain, how can he win any ICC Trophy? We pay the price for removing Kumble! @BCCI

India lost the world cup 2 years ago when the team management refused to take tough calls and settle no 4 5 n 6 positions. This weakness was on fm display in the WC after dhawan getting injured. Kohli and shastri deserve to be sacked from their management positions for that.

Karma doesn’t spare anyone. Kohli and co revolted against Anil Kumble before the CT17 finals night to bring back shastri. This is payback, bitch.#indiavsNewzealand #ViratKohli

Another controversial decision taken by Kohli and Shastri was the exclusion of Ambati Rayudu, who the team management refused to include in the side despite his terrific record. This prompted Rayudu to make a shock retirement announcement from all forms of cricket. The BCCI has now reportedly decided to grill Shastri and Kohli on why Rayudu was not picked up as a replacement for Vijay Shankar, who was ruled out due to injury.

Rayudu’s exclusion from the team had stunned many cricket experts when the team for the World Cup was announced earlier this year. While Rayudu and Rishabh Pant had faced rejections, Dinesh Karthik and Vijay Shankar were included in the team. Shankar was later ruled out of the World Cup due to injury, but the selection committee called in Mayank Agrawal as his replacement even though he has not played a single One Day International.

Recently, a report by the Dainik Jagran newspaper had said that the current Indian team was grappling with serious factionalism with the team being divided into two camps. The report said that while one camp was being led by Kohli, the other camp had its allegiance to vice-captain Rohit Sharma.

The report also added that both Shastri and Kohli often took unilateral decisions excluding Sharma out of the process.

BCCI insiders say that both Shastri and Kohli enjoy the unconditional support of Vinod Rai. This has led many to demand the removal of Rai from the BCCI.

Vinod rai. Sir… You are not appointed by any political party. Go and start whatever you want for the betterment of cricket. Start showing you power. Kick that Ravi idiot Shastri out of team.

Funny #WorldCup2019 this was by @BCCI @imVkohli Vinod Rai & @RaviShastriOfc
Declared Rayudu as No. 4 in World Cup
But did nt take him 2 England
And while WC was going on, Ambati got upset & announced retirement. Pant replaced him as No. 4 played rash shot and India lost #ENGvAUS pic.twitter.com/YhADPnQq7q

Where this man there is debacle as we have seen, he was CAG in congress, .@INCIndia lose, finance derailed . Now he is @BCCI interim president Indian cricket team lose WC2019 semi final .
This man well known #panauti Vinod rai #indVsNez @kunalkamra88 pic.twitter.com/WiqPsJYTZZ

It remains to be seen whether Kohli, Shastri and Rai will leave their current roles owning responsibility for the humiliating performance in the World Cup semi-final.