Facebook has issued a lame excuse to defend its senior public and policy executive, Ankhi Das, after an investigative report by the Wall Street Journal revealed how she had blocked the efforts to punish BJP MLA Raja Singh for his Islamophobic posts. The report had also accused Facebook India of providing help to the BJP during the last parliamentary elections in 2019. 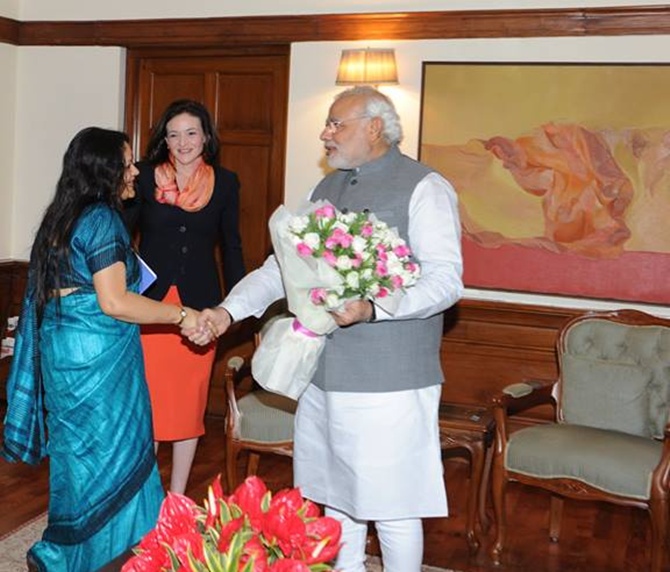 The statement by Facebook, according to the NDTV, read, “We prohibit hate speech and content that incites violence and we enforce these policies globally without regard to anyone’s political position or party affiliation. While we know there is more to do, we’re making progress on enforcement and conduct regular audits of our process to ensure fairness and accuracy.”

The report became a topic of a slugfest between the Congress and the BJP. Congress leader Rahul Gandhi had taken to social media accusing the RSS and the BJP of controlling Facebook and its instant messaging platform WhatsApp in India. This evoked an angry response from Union Minister Ravi Shankar Prasad, who called Gandhi a ‘loser.’ This coincided with a photo of Ankhi Das posing for the camera with Prime Minister Narendra Modi and Prasad going viral on the internet.

Ankhi Das wasn’t only accused of defending Islamophobic posts by hatemonger BJP leaders. According to a report in the Wall Street Journal, Das had also shared on her own Facebook page a post from a former police official, who said he was a Muslim, in which he had called India’s Muslims traditionally a ‘degenerate community’ for whom ‘Nothing except purity of religion and implementation of Shariah matter.’ Das wrote that the post ‘spoke to me last night’ adding that ‘As it should to (the) rest of India.’

The report by the WSJ said that Facebook under Ankhi Das also refused to take action against BJP MP Anantkumar Hegde, who has been notorious for writing ‘essays and cartoons on his Facebook page alleging that Muslims are spreading Covid-19 in the country in a conspiracy to wage ‘Corona Jihad.’ “Human-rights groups say such unfounded allegations, which violate Facebook’s hate speech rules barring direct attacks on people based on “protected characteristics” such as religion, are linked to attacks on Muslims in India, and have been designated as hate speech by Twitter Inc. While Twitter has suspended Mr. Hegde’s account as a result of such posts, prompting him to call for an investigation of the company, Facebook took no action until the Journal sought a comment from the company about his “Corona Jihad” posts. Facebook removed some of them on Thursday. Mr. Hegde didn’t respond to a request for comment,” the report continued.

The WSJ report also referred to the hate speech made by former BJP MLA Kapil Mishra just before the religious pogrom started in Delhi killing 53 people, mostly Muslims. “In February, the former BJP lawmaker Kapil Mishra gave a speech warning police that if they didn’t clear protesters demonstrating against a citizenship bill that excludes Muslims, his supporters would do so by force. Within hours of the videotaped message, which Mr. Mishra uploaded on Facebook, rioting broke out that left dozens of people dead. Most of the victims were Muslims, and some of their killings were organized via Facebook’s WhatsApp, according to court documents filed by police and published in Indian newspapers.”

Mark Zuckerberg later cited Mishra’s post, without naming him, in an employee town hall meeting in June, as an example of the sort of behavior that the platform wouldn’t tolerate from a politician. The company took down the video post.