Indian Idol judge Neha Kakkar was told by her fellow judges to stop her game Kitta Nahi Kitta during the theatre round of Sony TV’s singing reality show. Himesh Reshammiya threatened to complain about her to her husband Rohanpreet Singh, a suitor of ex-Bigg Boss contestant Shehnaaz Gill aka Punjab’s Katrina Kaif. 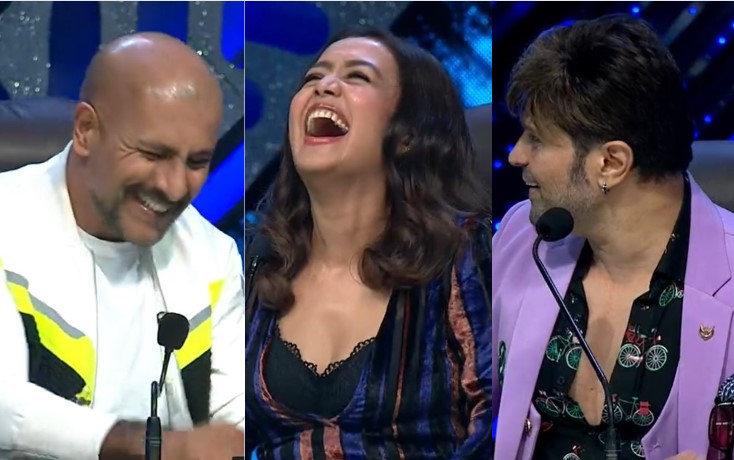 This was after Neha abruptly announced, “I have a game. This is Nehu’s Game Show. Kitta Nahi Kitta (You did it or didn’t do it). You say Kitta if you did it. You see, I have now become a Sikh woman. I’m so obsessed with this was on my mind even the day I got married.”

No sooner did Neha mention the swimming pool in her question, Neha’s fellow Indian Idol judge Vishal Dadlani interrupted saying, “No, No. Don’t be so disgusting.”

But Neha continued, “Did you ever pass urine or stool inside a swimming pool?” Himesh Reshammiya said that he will complain about Neha to her husband Rohanpreet Singh.

Unaffected by comments from Vishal and Himesh, Neha asked, “But Himesh, you never did that even when you were a child?” Himesh replied, “What kind of talk are you indulging in? I’ve never done that.”

Neha was in no mood to stop as she continued, “Ok, even if you didn’t do, did you ever feel anything warm (inside the water) close to you?” As for Vishal, he told Neha that she should not even look at him.

Neha got married to Rohanpreet Singh in October this year. Her husband shot to fame by taking part in a singing reality show before appearing in another TV show as a suitor of ex-Bigg Boss contestant Shehnaaz Gill aka Punjab Katrina Kaif.

Both Neha and Rohanpreet had traveled to Dubai on their honeymoon. The couple had later appeared on The Kapil Sharma Show, where the famous singer revealed how she had no plans to marry Rohanpreet even when they were shooting their music video.