Filmmaker Ram Gopal Varma has released the first look of his film Arnab, The News Prostitute with a stinging attack on the Republic TV founder, Arnab Goswami. While sharing the poster, Varma explained the difference between a ‘normal prostitute’ and Goswami. This came just days after FIR actress Kavita Kaushik asked everyone to shun TV channel that were engaged in spreading hate. 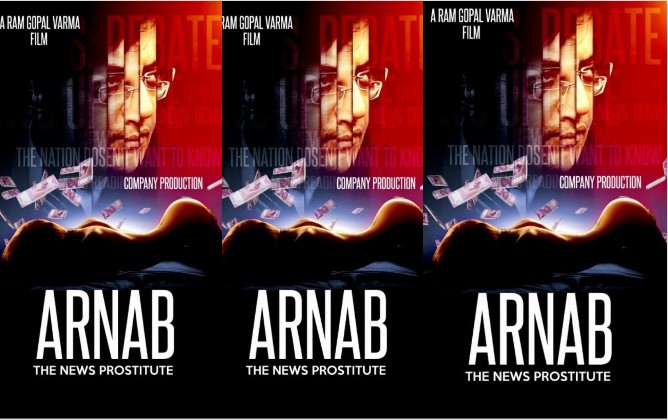 In the video, Goswami could be heard shouting in his inimitable style even as Rs 2,000 notes kept falling. The short video has already clocked almost half a million views on YouTube within two days of its release.

On 4 August, taking a dim view of Goswami’s relentless coverage on the unnatural death of Sushant Singh Rajput, Varma had urged Bollywood big names such as Salman Khan, Shah Rukh Khan and filmmakers Aditya Chopra and Karan Johar to break their silence and stop Goswami from portraying Bollywood in a poor light. Varma was incensed by Goswami’s recent on-air meltdown where he sought to expose the ‘criminal side’ of Bollywood.

The Bollywood filmmaker had also said that his next film to expose Goswami will be called ‘Arnab, The News Prostitute.’

Here is the first look of Arnab: The News Prostitute Motion poster link in story & bio

More recently, FIR actress Kavita Kaushik had issued bold advice to ‘change the world’ as she urged people to end their obsession with Saif Ali Khan’s son and stop watching ‘sadist’ TV channels such as the one owned by Arnab Goswami. Kavita, who had earlier slammed Goswami for his shenanigans during the coverage of the Palghar lynchings, took to Twitter to share her thoughts. Her idea was instantly endorsed by Saif Ali Khan’s co-star Kubbra Sait.