Indian Idol judge Vishal Dadlani has lashed out at Hindutva fanatics after a statue of Sai Baba was sensationally desecrated in a temple in Delhi only to be replaced with another idol of the  Hindu God Ganesha. Vishal, who is also a renowned music composer in the Hindi film industry, termed the incident ‘heartbreaking.’ 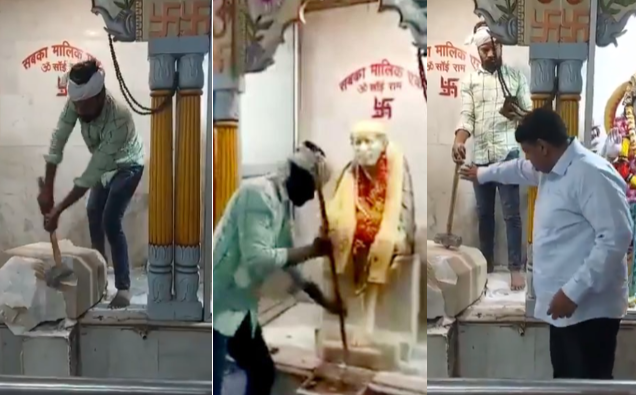 “Heartbreaking, but sadly, not surprising. Wonder what Sai Baba’s (mostly Hindu) devotees, will say or do about this,” Vishal tweeted expressing his deep anguish over the shameful incident.

According to news agency PTI, a group of devotees had approached the Delhi Police after a video capturing the removal of the Sai Baba idol from the temple of Shahpur Jat, Hauz Khas, made its way to social media platforms. In the video, a man could be seen instructing another man to demolish the idol saying that Sai Baba was a Muslim.

No sooner did the video of the Hindutva goon appear on social media, several devotees approached the police. “We have received a complaint. The matter is being looked into and appropriate legal action will be taken accordingly,” Atul Kumar Thakur, Deputy Commissioner of Police (South), was quoted by news agency PTI.

The Delhi Police have, however, not registered any case in the matter. Meanwhile, the old Sai Baba idol has now been replaced with a statue of the Hindu god Ganesha.

Sai Baba was a spiritual leader, who has millions of followers mostly Hindus.

As for Vishal, he’s currently busy judging the latest edition of the singing reality show Indian Idol on Sony TB along with Neha Kakkar and Himesh Reshammiya. The famous music composer was recently in the news after he took a dig at Finance Minister Nirmala Sitharaman in the aftermath of a fiasco surrounding the reversal of a government decision slashing interest rates for small saving schemes.