Defence Minister Rajnath Singh on Tuesday performed puja of the Rafale jet in France after writing Om on its body and placing marigold flowers and breaking the coconut. Two lime were also placed underneath the Rafale wheels ostensibly to ward off bad luck. 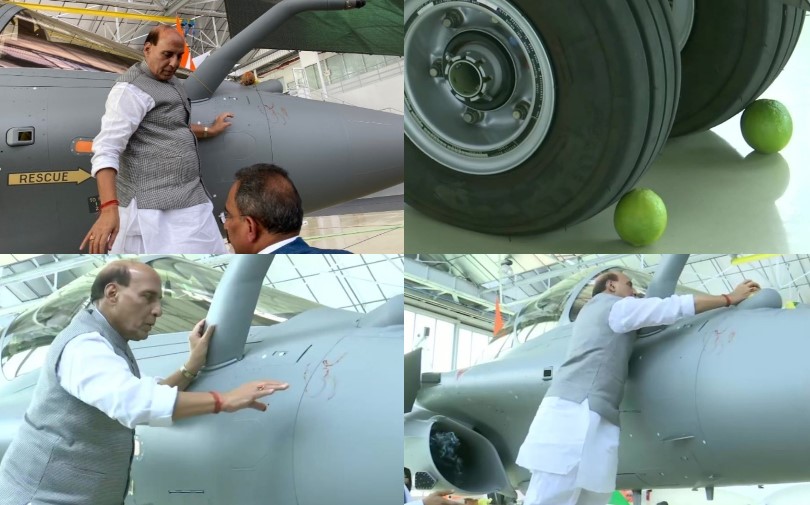 Using lime and green chilli to ward off bad luck is a well established Indian superstition. No sooner did the photos of Singh performing puja of the Rafale jet emerge on social media, it triggered a fresh debate on whether it was appropriate for the country’s defence minister to promote superstition. One user on Facebook wrote, “India buys Rafale to protect the country, then they buy nimboo to protect Rafale”.

Rafale doesn’t need fuel it will run on lemon and coconuts ????????

With this lemon temperament… we will be purchasing such equipments after 2100 AD #Rafale https://t.co/Z9Ua4PH8Zn

Nowadays, everything is historic. The lemon placed under the tyres of Rafale is also historic.

‘Promotion of Scientific Temper’ WAS a Fundamental Duty of citizens of India. & These jackasses are writing Om & putting nimbus below the wheels of Rafale, a fighter aircraft.

Rajnath Singh defended the use of coconut and lime before accepting the first Rafale jet from France. He wrote on Twitter, “On the occasion of Vijayadashmi, I performed the puja of weapons in France today. It’s an age-old tradition to worship weapons on Vijayadashmi.”

Singh also flew in the jet and said that the experience of flying in an aircraft travelling with supersonic speed was extraordinary.