The Congress has stepped up its attack on Arnab Goswami and the BJP on the reference to former Union Minister Arun Jaitley’s poor health in the alleged leaked WhatsApp chat between the Republic TV founder and Partho Dasgupta, the former CEO of the Indian TV rating agency, BARC. Referring to Goswami’s infamous ‘Jaitley stretching it’ line, Congress leader Salman Khurshid said that the revelation was ‘very painful.’ 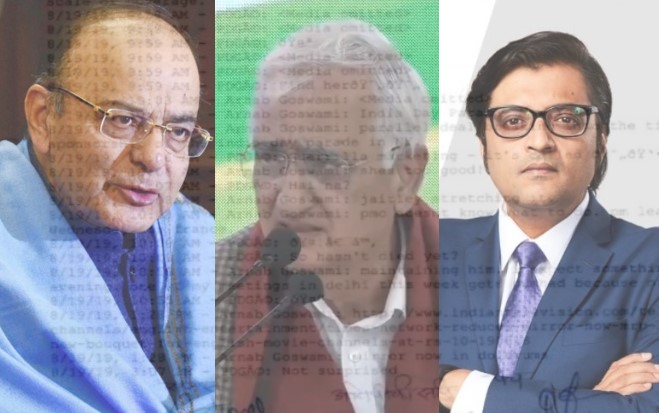 Speaking to reporters in Delhi, Khurshid said, “I don’t think there can be more saddening a development than this. It is extremely painful, if this is how BJP treats its own people, how would they treat ordinary people in this country, how will they treat this land? I don’t know how many favours they may have received from him in his career.”

Former Union Minister Jaitley died in Delhi on 24 August last year, two years after undergoing a kidney transplant. However, in a chat dated 19 August, Goswami had allegedly told Dasgupta in exasperation, “Jaitley stretching it.” His subsequent message allegedly had read, “PMO doesn’t know what to do. PM leaving on Wednesday for France.”

Khurshid, who held several key positions during the Congress government headed by Dr Manmohan Singh between 2004 and 2014 said, “The kind of conversations that have come about him is deeply deeply saddening, very hurtful. He was on his death bed and all his supporters, all his friends and all his contemporaries were very saddened that he left his life so early. And yet, here’s a cynical, hardened mind talking about ‘why doesn’t he die quickly? What is it that they say the government is maintaining him?’ In other words, why are efforts being made to keep him alive when the prime minister has to travel abroad?”

It is extremely painful, if this is how BJP treats its own people, how would they treat ordinary people in this country, how will they treat this land?: Shri @salman7khurshid#BJPBrokerArnab pic.twitter.com/zmz1EXoDQ2

Meanwhile, the Congress has demanded a thorough probe by a Joint Parliamentary Committee into the explosive revelations made by the leaked WhatsApp chat between Goswami and Dasgupta. The Congress Working Committee on Friday passed a resolution, which stated, “It is shocking that days after the revelations, the Prime Minister and the Central government remain silent on the issue as though the storm will pass. Their silence underlines their collusion, complicity and guilt. The storm will not pass and we will hold the Central government accountable for compromising national security and aiding India’s adversaries.”