The controversy surrounding Krushna Abhishek of The Kapil Sharma Show and his uncle Govinda has spiralled out of control after the former’s wife Kashmera Shah and sister Aarti Singh decided to launch a veiled attack against the former co-star of Salman Khan. This came days after Krushna boycotted his own show to avoid a confrontation with Govinda when the latter appeared on the Kapil Sharma-hosted show. 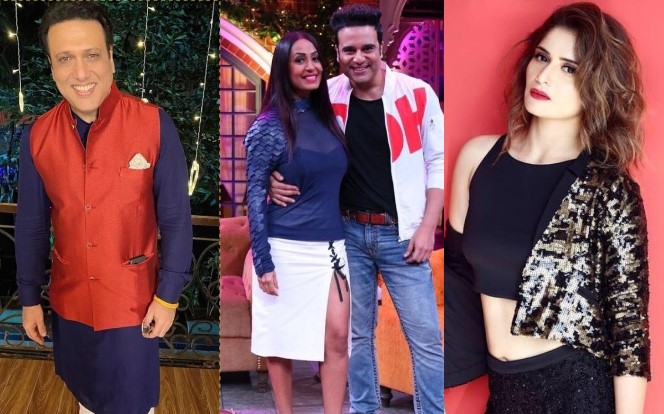 Reacting to Krushna’s decision to boycott The Kapil Sharma Show, Govinda had issued a detailed statement accusing his comedian nephew of making defamatory utterances against him.

“He chose to opt-out as he had some reservations. Later he went ahead and stated in the media about his belief on our relationship. This statement had defamatory comments and was issued with only a little thought. It had a snowball effect as it was voyeuristic in nature,” Govinda had added.

Talking about his relationship with Krushna, the former co-star of Salman Khan had said that it was ‘erroneously alleged by Krushna’ that he did not go to see his twins. He had said, “I along with my family went to see his twins in the hospital and met the doctor (Doctor Awasthi) and the nurse taking care of them. However, the nurse told me that the mother of the kids – Kashmira Shah never wanted any of the family members to come and see the surrogate babies. Upon further insistence, we were made to see the babies from a long distance. We returned with a heavy heart, however, I strongly feel that Krushna does not know of this incident. One can feel free to connect with the doctor and the nurse on the same and get to know the truth. Krushna also came to our home with the kids and Aarti Singh, which he has forgotten to mention in the statement.”

While Krushna has decided to not react to Govinda’s statement, his wife took to Instagram to launch a veiled attack against the latter. Sharing a photo of herself with her baby, Kashmera wrote, “Life does not come with an instruction guide but it comes with a Mother and as a Mother it’s my job to protect you and make you my priority number one. As a mother it’s my job to cause you no harm and keep your best interests at heart. As a mother my heart pains to see you in pain and I feel useless that I can’t take your pain away from you. However I can take those things and people away that cause you that pain. As a mother I promise to Never let people use You for their personal agenda. I promise to Never let them belittle your presence in my life. You will soon learn as you grow up that no matter how young one is Mighty People will Stoop at Nothing to Use you. But as long as I am Alive and even beyond that I will protect you from all selfishness of this world. Your Mother Kashmera Shah Sharma.”

Aarti too joined the conversation as she wrote, “♥️♥️♥️♥️♥️♥️♥️ awwww . Mothers are the most genuine relation anyone can hv.”

In a separate post, Krushna’s sister too took an indirect potshot at Govinda as she wrote, “apne to apne hote hain (Your loved ones will always stand by you).” Sharing a photo of her childhood, Aarti wrote, “Little me .. and tht little kid in me has still not gone. Thank u for everyone who still take my immaturity. M such a kid at times..thank u for putting up with me when I’m at my worst. November I love u . U taught me alot .. apne toh apne hote hai .. true ….”

The Kapil Sharma Show had recently triggered a full-blown controversy after Krushna Abhishek decided to not perform in front of his uncle Govinda when he appeared on the Sony TV comedy show over the weekend with his daughter. What had deepened the controversy further was Govinda’s dig at Krushna in front of Archana Puran Singh and Kapil Sharma during the show. The topic dominated social media conversations after Krushna shared a photo of his wife Kashmera Shah with an innocuous caption.