The Congress took its social media war against its political rival to a new level on Thursday when it targeted six BJP leaders including Prime Minister Narendra Modi on Valentine’s Day with quirky posts. 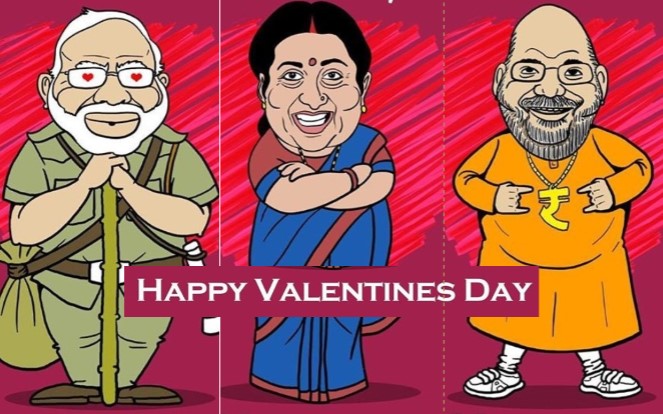 It posted hilarious cartoons of the BJP leaders including Uttar Pradesh Chief Minister Yogi Adityanath with quirky captions by borrowing famous songs from Bollywood to take potshots at them.

The Congress attacked Modi for his alleged involvement in corruption in the Rafale deal. Posting a caricature of Modi in a watchman’s uniform, the party’s Instagram caption read, “The Accidental #Chowkidar: Chori chori, Chupke Chupke.”

The Valentine’s Day post of the Congress on Instagram for Union Minister Smriti Irani made fun of her fake degree. It read, “The Walking-Talking Meme: Main #Tulsi, Yale ke garden ki!.” The Tulsi jibe was aimed at Irani’s past as a TV actress.

The Congress shifted its attention to BJP President Amit Shah by mocking his reputation as someone who indulges in horsetrading to buy legislators from other parties in a bid to form BJP governments. The post read, “The #Player: Nayak nahi, khalnayak (villain) hoon main!”

The Rafale controversy was a theme of the Congress’ Instagram post for Defence Minister Nirmala Sitharaman as it mocked her silence on the raging controversy over the purchase of fighter jets from France. It said, “The #Backbencher: Kuch na kaho, Kuch bhi na kaho!.”

The party targeted Adityanath for his desperation to change names of cities in Uttar Pradesh because they were Muslim sounding. Some of the names already changed by Adityanath are Allahabad, changed to Prayagraj, Faizabad, changed to Ayodhya, and Mughalsarai, which was changed to Deen Dayal Upaddhyay station. The Instagram post by the Congress read, “The #Namesake: Saare naam, humne kiye hai change tere liye sanam!.”

The social media war between the Congress and the BJP assumes significance ahead of this year’s Lok Sabha polls. In 2014, it was the BJP, which cornered the Congress with its aggressive and high-tech social media campaign. However, five years later, the saffron party is finding itself at the receiving end as a rejuvenated Congress appears to have adopted an incredibly offensive strategy on social media.