Kings XI Punjab defeated Rajasthan Royals by 14 runs on Monday during their inaugural IPL encounter in Jaipur. But the match became a topic of intense social media conversations after video of spectators chanting chowkidar chor hai slogans during the match went viral. 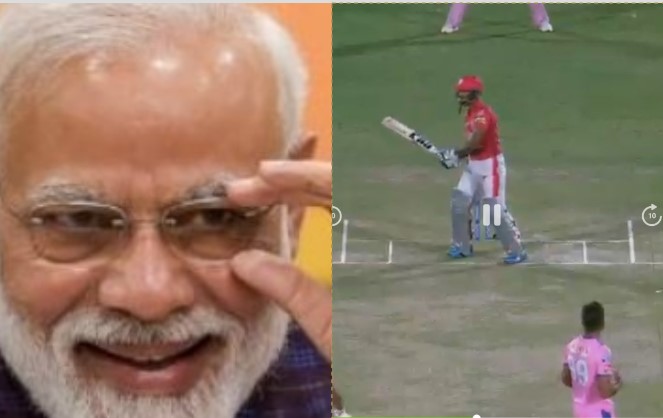 In the match, when Kings XI Punjab were batting at 169 for 3 in the 19th over of the match, suddenly a section of the crowd began to chant chowkidar chor hai slogans. The chant gained momentum as Jaydev Unadkat of Rajasthan Royals returned to start his bowling against Ankit Rajpoot.

No sooner did the clip go viral, social media users particularly those supporting the Congress began to take a potshot at the BJP and Prime Minister Narendra Modi to highlight the prevailing mood against the government across India.

Slogans raised by crowd in an IPL Match! pic.twitter.com/cqqVRCxgTC

#ChowkidarChorHai is a rage. And for a reason. Maybe Joshi and Pandey misread the popular mood. https://t.co/yNQkDnuQpy

Congress President Rahul Gandhi is credited with coining the slogan chowkidar chor hai in a bid to highlight Modi’s involvement in the Rafale scam. Modi had won the 2014 elections by claiming that he would function as the country’s chowkidar (watchman). But his stint as India’s prime minister saw several high profile financial scandals as many billionaire businessmen including Vijay Mallya, Nirav Modi and Mehul Choksi fled India after defaulting on thousands of crores of bank loans.

Gandhi had accused Modi of personally intervening in the Rafale deal to help his billionaire businessman friend Anil Ambani, whose newly formed defence company was preferred over the state-owned Hindustan Aeronautics Limited to become the Indian offset partner of Dassault Aviation, the manufacturers of Rafale jets.

Note: Contrary to many BJP supporters’ claim, the video being shared on social media is not doctored. Here’s the link to the original video, available of the hotstar website. Slogans of Chowkidar Chor Hai can be heard after 2.30.20.