Nita Ambani’s son Akash Ambani and daughter-in-law Shloka Mehta arrived in Pune on Wednesday to support Mumbai Indians against Shah Rukh Khan’s Kolkata Knight Riders, but returned dejected after their team were defeated by five wickets. However, that did not stop Akash and Shloka from continuously applauding their players every time Kolkata Knight Riders lost wickets. Akash and Shloka were seen arriving in their VIP balcony to celebrate the dismissal of Nitish Rana of Kolkata Knight Riders. However, immediately after their celebration, Rana was seen violently smashing his bat against an advertising hoarding before throwing his bat in the air in utter disgust.

Chasing a target of 162, Kolkata Knight Riders appeared to be cruising nicely when Nitish Rana miscued an awkward bounce from Murugan Ashwin and Daniel Sams made no mistake in taking the catch. Frustrated by his inability to read the ball, Rana looked exasperated when he arrived at the boundary, walking towards the dug-out area.

As Mumbai Indians celebrated Rana’s dismissal, the TV camera moved toward Akash and Shloka, who were ecstatic as they sensed a victory for their team. Dressed in a denim sleeveless jumpsuit with a V neck, Shloka appeared more elated than her husband. On another occasion, Shloka was seen fervently beating the reiling as Kolkata Knight Riders lost another wicket in Andre Russel. Akash, for his part, was seen walking restlessly. 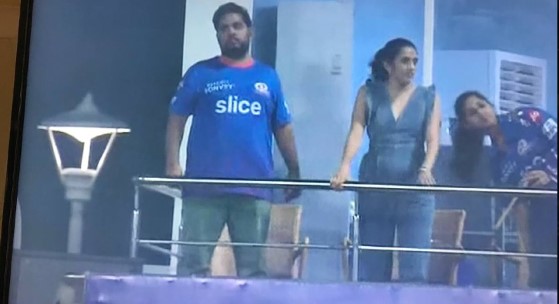 In the end, Mumbai Indians had to face their third humiliating defeat in as many matches. The five-time IPL champions have struggled to register a single match after their three matches.

This was the first time Shloka was seen applauding her team in person since giving birth to Prithvi Ambani, who was recently in the news for starting his school. Last year’s IPL was adversely impacted by the Covid outbreak and had to be held in two stages. The first part was held in India, whilst the second phase was held in the UAE. 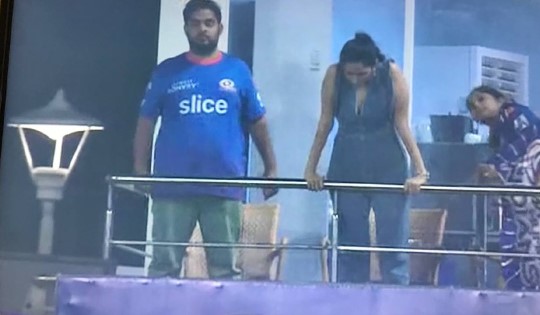 The tormentor-in-chief for Mumbai Indians was Pat Cummins, who equaled the IPL record for hitting the fastest 50. He took 14 balls to achieve the feat. Earlier, KL Rahul had achieved the same feat.

Rohit Sharma was full of praise for Pat Cummins saying that he never expected the Aussie fast bowler to bat in that fashion.