Bharat Biotech has dropped a bombshell that its vaccine prices would be significantly higher than what the Serum Institute of India has decided to charge the state governments and private hospitals. The stunning revelation by Bharat Biotech, which manufacturers Covaxin, came hours after actor-filmmaker Farhan Akhtar criticised Adar Poonawalla-led company for charging state governments and private hospitals higher than what it had charged the central government for the same vaccine. 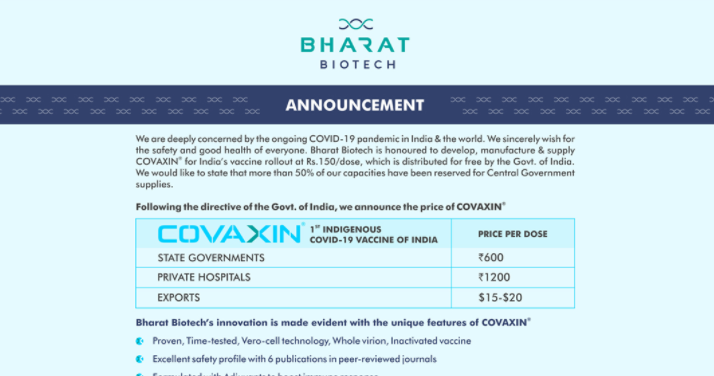 A statement by Bharat Biotech said that Covaxin would cost Rs. 600 for state governments, while private hospitals would have to pay Rs. 1200 for the single dose. The export prices for the same have been kept in the range of $15 and $20.

In contrast, the SII has kept the price for the single dose of Covishield at Rs. 400 for state governments and Rs. 600 for private hospitals.

The revelation evoked angry reactions from netizens on Twitter. One user wrote, “Central govt appropriating the funds of the state govts. PS: I like how the prices for the central govt is not included in the table, but written in smaller font in para 1 (love the way u lie).” Another commented, “Translation: State Govts and Private Hospitals are going to subsidise the central govt. who are also getting more than 50% of the production capacity. This is nothing but an indirect COVID Tax/Cess for Chowkidar sarkar.”

Earlier, the SSI was forced to release an extraordinary statement after Farhan Akhtar lashed out at the price disparity for the single dose of Covishield, to be sold to state governments and private hospitals. The controversy was triggered after it emerged that the SII had charged just Rs. 150 to the central government for the same.