Abu Malik was evicted from Bigg Boss reality show on Monday night after host Salman Khan announced that contrary to his earlier announcement, only one contestant will leave the show. But, this did not come as a shock to many as Malik’s participation hasn’t been enough compared to other housemates. Paras Chhabra and Siddharth Dey were declared safe by Salman Khan after the Bollywood megastar asked the female contestants in the house to pick between Abu Malik and Siddharth Dey. However, little later in the show, Paras Chhabra was seen having ane extraordinary meltdown as he dared Salman Khan to kick him out of the show. 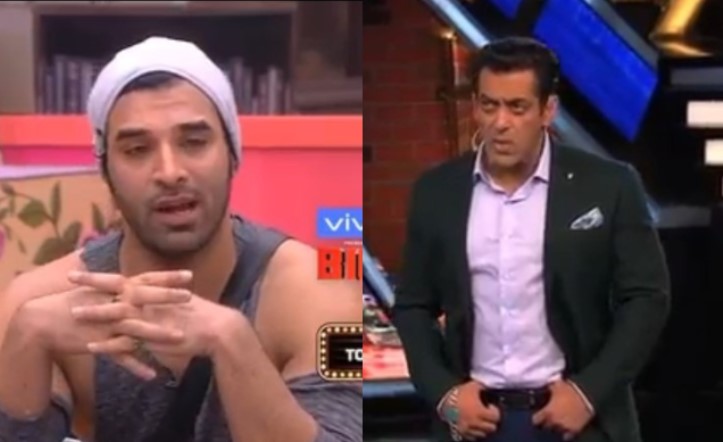 After Salman bid adieu to housemates, Paras was seen in conversation with his ‘friend’ Mahira Sharma. Referring to Salman Paras was heard saying that he was sick of being singled out by Salman Khan every week. “I’m tired of Salman sir’s bickering every week. If he doesn’t like me, then he should kick me out of the show,” he told Mahira.

It seems Paras wasn’t happy that the caller of the week on Saturday had criticised him for speaking against the fellow housemates behind their back. Paras alleged that the said caller was being coached to make negative comments about him on the show. He told Mahira, “.. Kuch zyada hi Salman sir ka kich kich chal raha hai. I don’t like it. If you have so much problem, then kick me out of the show.”

Although Salman returned to host the show, he did not react to Paras’ comments about him.

In a promo posted by the makers of Bigg Boss on Monday, Salman was seen losing his cool. It’s not clear if this was in response to comments made by Paras, since the Bigg Boss  did not air this portion. It remains to be seen if the makers of the reality show will broadcast this segment in the upcoming episode.

Monday night also saw three Bollywood actors namely Mouni Roy, Boman Irani and Rajkumar Rao join Salman to promote their upcoming film. Boman told Salman that his brother-in-law was a huge fan of Shehnaaz Gill, who claims to be the Katrina Kaif of Punjab. Mouni too said that Shehnaaz was very ‘cute.’