Unaffected by media reports that the government wasn’t happy with Bharti Singh of The Kapil Sharma Show going about her normal life, the laughter queen’s friends in the entertainment industry have rallied behind her, extending support to her by appreciating her social media posts. Notable amongst them are Krushna Abhishek and Archana Puran Singh of the Salman Khan-produced show and former Bigg Boss contestant Aarti Singh. 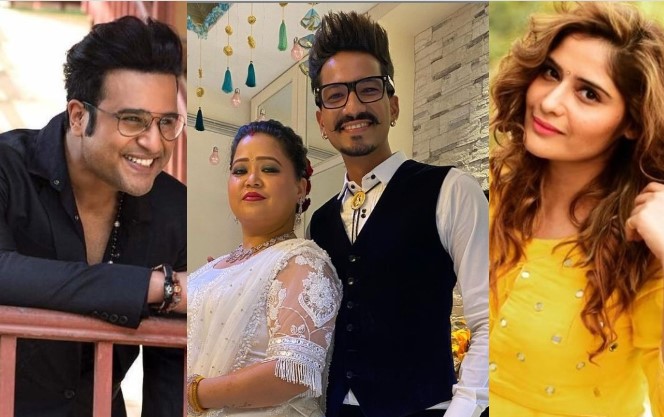 Reacting to a recent photo of Bharti and her husband Haarsh Limbachiyaa, Krushna reacted, “Oh harsh nice pendant very stylish.” Not to be outwitted by her co-star, Bharti replied, “haan bhai kisi ne humko gift diya hai bola rakhlo vapis mat dena (Yes brother, someone gifted that to us, told us to keep it and not return it).” Krushna’s sister Aarti wrote, “Love u both.”

Another video of Bharti and Haarsh elicited a series of red-heart emojis from Ekta Kapoor, one of the leading producers of the Indian film industry. Also liking her comments was Archana, who’s the judge of The Kapil Sharma Show.

A recent report by National Herald had claimed that the Narcotics Control Bureau was unhappy with Bharti resuming her normal life. The report had also added that the anti-drug agency was not pleased with the public statements made by Bharti’s friends in her support when there were reports of her unceremonious exit from The Kapil Sharma Show.

What fuelled speculations on Bharti’s future on the Sony TV comedy show fronted by Kapil Sharma was the fact that she skipped two episodes in a row even after her release. Another report claimed that the government had suspended at least two officers from the Narcotics Control Bureaufor allegedly helping Bharti obtain bail within hours of being sent to 14 days of judicial custody.

Bharti was arrested with her husband last month after the NCB discovered over 85 grams of ganja from her premises. They were sent to judicial custody for 14 days, but a court in Mumbai had granted them bail. Both have not returned to the small screen since being released from judicial custody.