Comedian Raju Srivastava has sensationally dragged the names of Sunil Grover and Krushna Abhishek of The Kapil Sharma Show in the drug racket scandal after the Narcotics Control Bureau arrested comedian Bharti Singh and her husband Haarsh Limbaachiya. Raju also said that Bharti was a culprit but the anti-drugs agency should not target small artists, adding that there was a need to cut the supply chain of banned substances. This came after netizens detected a direct link between the arrest of Bharti and Haarsh and Kiku Sharda mocking Arnab Goswami on the Salman Khan-produced show. 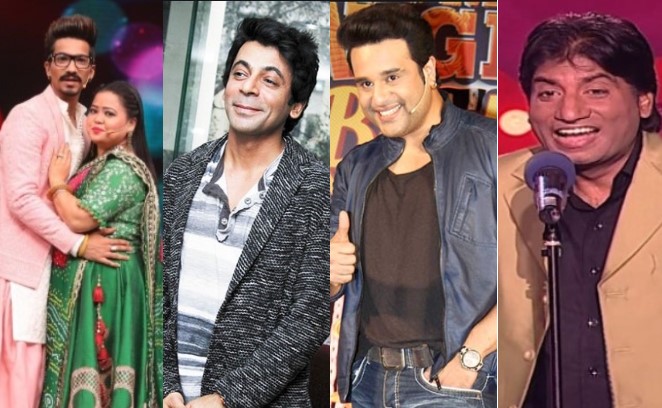 Speaking to Hindustan Times, Raju said that his first reaction to the news of Bharti’s arrest was that it was fake but he was ‘shocked and sad’ when it was confirmed. Narrating a story, Raju said that he had worked with Bharti in Comedy Circus, Raju Haazir Ho and many other live shows in the past, adding that he also attended her wedding. At no point, he added, did he suspect that Bharti may be consuming drugs.

“I would get curious as to how her friends, like Sunil Grover, Krushna (Abhishek), could dance all night, not sleep, and then the next day again have fun and dance. I would think why don’t they feel the need to sleep, and yes I know they are younger than me maybe that’s why they have the energy. Lekin ab har cheez pe doubt jaa raha hai jabse news aayi hai. (But, now I am beginning to doubt everything ever since this news has arrived),” Raju told Hindustan Times.

Another comedian Sunil Pal, who too has worked with Bharti Singh, told Aaj Tak, “People consume drugs to look cool and famous. Nowadays artistes feel that if they do this, they can be a part of a group of people who are influential and will help them get more work. When the time is good, people enjoy success, but when bad times are bad, you get in trouble. So, one should always stay away from such vices.”

The NCB arrested Bharti and her husband on Saturday for consumption and possession of gaanja. The NCB had raided the couple’s house and the production house office, recovering 85 gms of the banned substance.

Netizens were quick to establish a direct link between her arrest and the recent mocking of Arnab Goswami by Bharti’s co-stars, Krushna Abhishek and Kiku Sharda on The Kapil Sharma Show, which is produced by Salman Khan.

Meanwhile, a court in Mumbai has sent Bharti and her husband to judicial custody for 14 days.