British public service broadcaster, the BBC, has had to issue an apology to Manchester United football club rubbish. This was after a message appeared on the BBC’s news channel on Tuesday during its coverage of the French Open saying ‘Manchester United are rubbish.’ 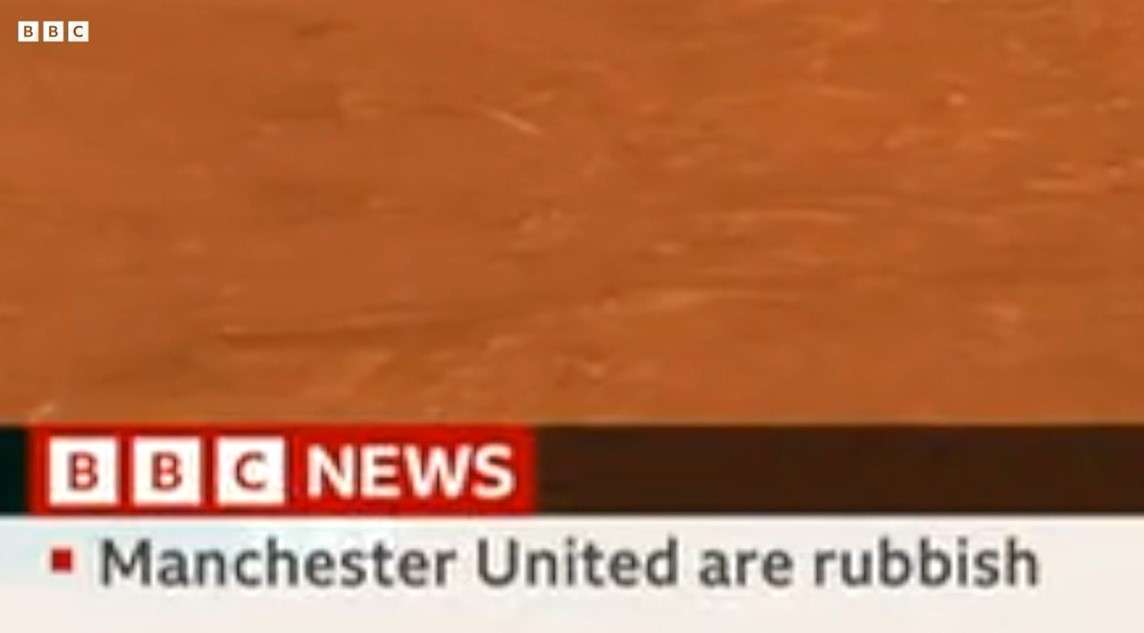 The embarrassing text popped up on the screen in the news ticker at the bottom while a report on French Open tennis was being broadcast.

As if this wasn’t enough, another message on the TV screen read, “Weather rain everywhere.”

TV presenter Anita Mcveigh, who was reading the news, showed an incredible presence of mind to apologise to viewers as she explained that someone who was learning how to use the ticker had mistakenly published the text.

She said on LIVE TV, “A little earlier, some of you may have noticed something pretty unusual on the ticker that runs along the bottom of the screen with news making a comment about Manchester United, and I hope that Manchester United fans weren’t offended by it.

“Let me just explain what was happening: behind the scenes, someone was training to learn how to use the ticker and to put text on the ticker, so they were just writing random things not in earnest and that comment appeared.

“So apologies if you saw that and you were offended and you’re a fan of Manchester United.

“But certainly that was a mistake and it wasn’t meant to appear on the screen. So that was what happened, we just thought we’d better explain that to you.”

An official BBC statement added: “There was a technical glitch during training with our test ticker, which rolled over to live programming for a few seconds.

“We apologised for any offence caused on air.”

I had nothing to do with this!! #mcfc https://t.co/BTBwsJjFlm

BBC presenter Clive Myrie, who is a known Manchester City fan, took a dig in a tweet saying that he had no role to play in the embarrassing text.

In the just-concluded Premier League, Manchester United failed to qualify for the Champions League.