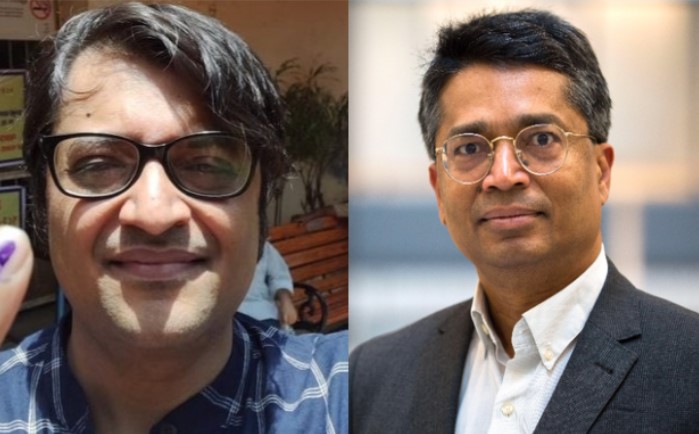 Goswami was discussing the controversy over Congress President Rahul Gandhi’s citizenship with his usual guests on Tuesday. He had also invited Sweden-based Ashok Swain to take part in the debate. Swain is a known critic of the BJP and Prime Minister Narendra Modi. All through the show, Goswami kept referring to Swain and ‘Mr Swine’ since Swain had asked him not to work as a BJP agent.

In one of his comments, Swain had said that all India needed to do was to write an email to the British Home Office to know if Gandhi ever held a UK passport or not. He said, “Arnab Goswami, I understand this is BJP doing, but you are acting as the BJP’s agent in promoting this fake news.”

The topic of Gandhi’s alleged dual citizenship had gained momentum after the Indian home ministry asked the Congress president to respond to the allegations made by BJP’s Rajya Sabha MP Subramanian Swamy on Tuesday.

Irked by the ‘BJP’s agent’ jibe, Goswami addressed his guest as ‘Mr Swine’ twice. A visibly hurt Swain took to Twitter to write, “This is what made Arnab mad last night – I called him a BJP Agent for Debating on a Fake New about Rahul Gandhi’s Citizenship!”

This is what made Arnab mad last night – I called him a BJP Agent for Debating on a Fake New about Rahul Gandhi’s Citizenship!https://t.co/W7NcijS4uB

Many detected a coordinated plan by Goswami to insult his guest since minutes after he had referred to his guest as ‘Mr Swine,’ right-wing propaganda website OpIndia’s Nupur Sharma tweeted gleefully, “Arnab refers to Ashok Swain as Ashok Swine and Mr Swine.”

Swain said that he had stopped going to Republic but the channel called him again on Tuesday and he agreed since he wanted to tell the truth on Goswami’s face. “Arnab was inviting me to his ‘debates’ last year quite often, I go there just to tell them what I think of them. In Nov 2018, I had a spat with TV Mohandas Pai over his selling beef and denying eggs to school kids. Openly Pai asked Arnab not to invite me anymore. So, they stopped inviting me for 4 months, yesterday he called again. It seems he had planned to call me ‘Swine’ – he had never done that in his previous shows,” Swain said.

Earlier this week, Goswami had faced allegations from Trinamool Congress’ Garga Chatterjee that his TV channel was a propaganda platform for the BJP since according to him, it operated using the saffron party’s money.