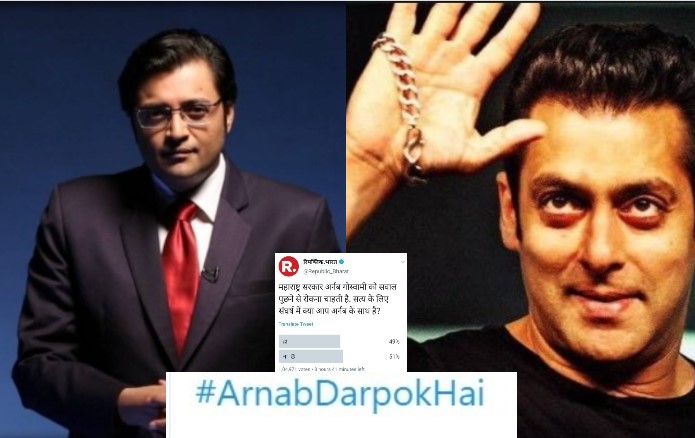 This was after Maharashtra Assembly accused Goswami of breach of privilege and reportedly sent him a 60-page notice. Last week, the controversial anchor had trended for several days after journalists were quick to declare him a ‘hypocrite’ as an old interview of Goswami praising Salman surfaced.

Reacting to the breach of privilege notice, Goswami said, “The Maharashtra assembly has sent me a 60 page letter asking me why I am questioning the Chief Minister, and threatening me with jail and breach of privilege. I have decided to fight this. I will continue to question Uddhav Thackeray and elected representatives and I will continue to fight them. I will fight them in the Court, but will never give in to such undemocratic practices. The Constitution is not a gift given to anyone, it is the right of every citizen. I will continue to uphold that right, ask my questions and exercise the right to report.”

However, Salman Khan fans used the opportunity to declare Goswami a darpok (coward) as they trended #ArnabDarpokHai. This was because a poll by Republic TV left Goswami red-faced forcing his TV channel to delete the poll from Twitter.

In its poll, Republic Bharat, the Hindi channel of Republic Media Network, had asked, “The Maharashtra government wants to stop Arnab Goswami from asking questions. Are you with Arnab Goswami in pursuit of the truth?” More than one lakh Twitter users took part in the poll with 51% refusing to support Goswami. This prompted Republic Bharat to delete the poll. 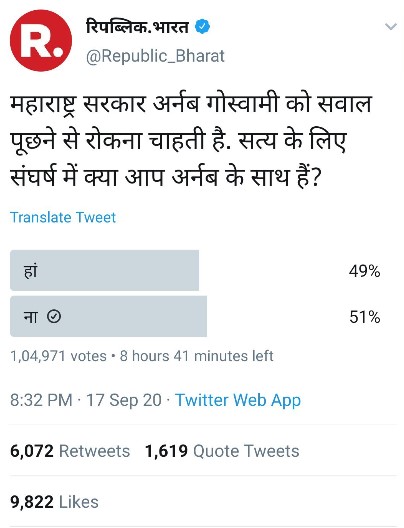 As expected, Salman Khan fans decided to take potshots at Goswami by declaring him coward.

Arnab just endorsed Rahul by deleting the online poll. He can only bark from his studio cage but never has the guts to face real people.#ArnabDarpokHai pic.twitter.com/W8U2dke7ja

Arnab Goswami who used to call everybody Coward

Ironically deleted a Poll which was going against him.

Now the Nation knows who is the real coward#ArnabDarpokHai pic.twitter.com/33Gk8HLX3t

Why are u scared of results of your own poll? It is like being scared of your own shadow. #क्यूं_डरता_है_अरनब#ArnabDarpokHai @SaralPatel pic.twitter.com/O4nYfe80L4

Last week Arnab Goswami was called a hypocrite for attacking Salman as journalists dug out an old interview of Goswami praising the Dabangg star.