Archana Puran Singh of The Kapil Sharma Show recently shared a video of her behind the scene video where she was seen ‘slapping’ her co-star Krushna Abhishek after she was informed that Kapil Sharma had decided to leave her out of his upcoming US tour. Archana told Krushna that she was never going to speak to him. 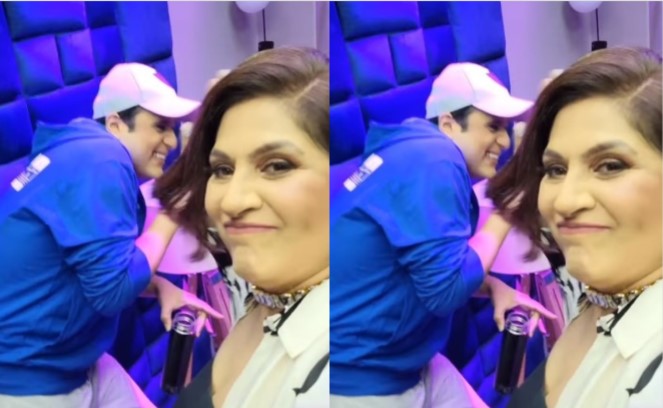 Sharing the video of her banter with Krushna, Archana wrote, “Behind the scenes मस्ती Part 2 (of a 2 part series).”

In the video, Krushna was heard saying, “We’ve started a new thing. We are going to the US but not taking Archana ji.” Reacting to this news, Archana charged at Krushna and slapped Krushna jokingly.

Archana was then heard saying, “Dirty people. They are not taking me (to the US). Keep making money and then blame me for earning money (from the show).”

Krushna then tried to placate Archana by saying the final list was not finalised and bosses were considering her name. Knowing fully well that Krushna was lying, Archana said, “Shut up. You are lying. I am not talking to you anymore.”

Reacting to the adorable video, one fan wrote, “Love you Archana ma’am.” “Behind the scenes are really holarious!! ??? Just like this wonderful show!! ???✌,” commented another fan. One fan wrote, “Ur so sweet Ma’am ? ur Love ??.”

Also Read: Archana Puran Singh drops bombshell, says she will be happy to quit The Kapil Sharma Show for Navjot Singh Sidhu if makers so desire

In another BTS video, Archana had shown her fans the place where Kapil Sharma’s guests sat before making their appearances on the show.

Archana had replaced Navjot Singh Sidhu as the judge of The Kapil Sharma Show. The veteran actor has often found herself at the receiving end of cruel jokes by her co-stars including Kapil Sharma. But, Archana has always earned plaudits for taking those jokes in her stride.

After Sidhu suffered a humiliating defeat in the last month’s Punjab polls, there were speculations that he would return to The Kapil Sharma Show, replacing Archana. This had prompted Archana to issue a public explanation saying that she wasn’t worried about losing her job from the show.