Archana Puran Singh on Sunday made a rare gaffe by mis-pronouncing a simple English word as she recorded a behind the counter scene video from the sets of The Kapil Sharma Show. Her fans, however, wondered why the show’s host Kapil Sharma had stopped ‘giving content’ for her Instagram videos. 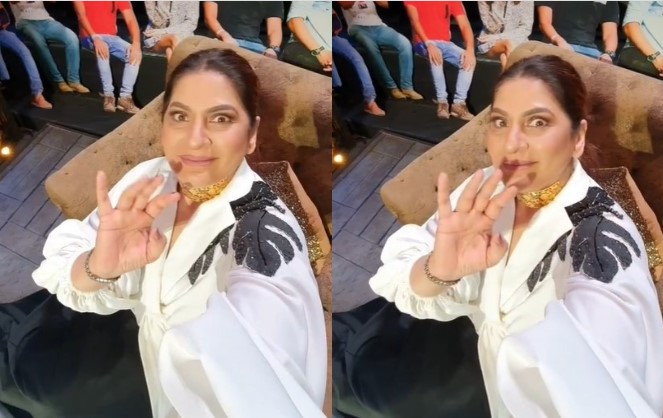 Archana was filming a BTS video featuring actors Raj Babbar and Jaya Prada among others when she exclaimed ‘Amajing‘ in excitement. The veteran actress soon corrected herself as she said, “I am making a video of them (guests) and I ended up pronouncing amajing while looking at her (Jaya Prada). Well she is amajing and amazing both.”

But her fans weren’t bothered by her gaffe as they appeared to be concerned over Kapil not reacting to her BTS video lately. One fan asked, “Kya baat h…. kapil sir content nhi de rhe mam apko pichle kch videos mein (What’s the matter? Kapil sir is not giving you content in your last few videos).” Archana replied, “I haven’t posted them.”

The presence of Raj Babbar and Jaya Prada caused a laughter riot on The Kapil Sharma Show on Sunday night. Raj Babbar found the effect of comedy so unbearable that he had to ask Krushna Abhishek at one point to give him a breather.

Krushna Abhishek in his inimitable style targeted Archana once again with his impeccable comic timing. Krushna reminded his guests Raj Babbar, Jaya Prada and Gurpreet Singh Waraich ‘Guggi’ about their stint in politics, but also added that the ex-judge of The Kapil Sharma Show was also a politician in reference to Navjot Singh Sidhu, who was later replaced by Archana.

After Raj Babbar gave his consent, “Krushna said, “I would have recited it even if you didn’t grant me permission.” He continued, “There used to be politician here. He used to often say chha gaye guru…One day a queen from Madh (Island) came and she brought an end to his earnings.”