Days after it was caught spreading fake news on Tablighi Jamaat by the Noida Police, news agency ANI has once been forced to again express ‘regrets’ for ‘incorrectly’ quoting Tamil Nadu Health Secretary Beela Rajesh on the number of positive COVID-19 cases under the ‘single source’ category implying that they had visited Delhi’s Nizamuddin Markaz. 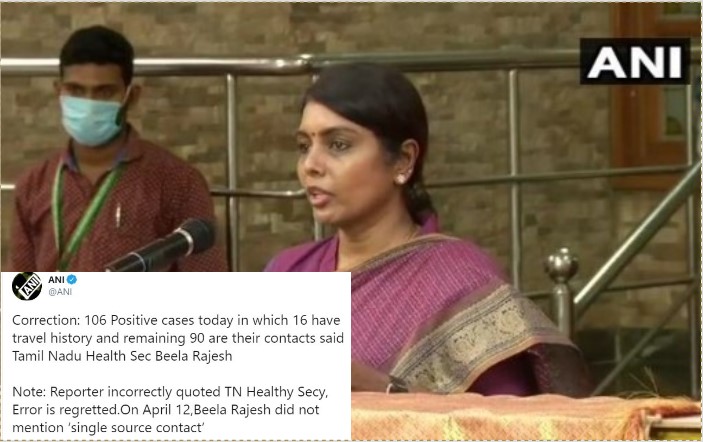 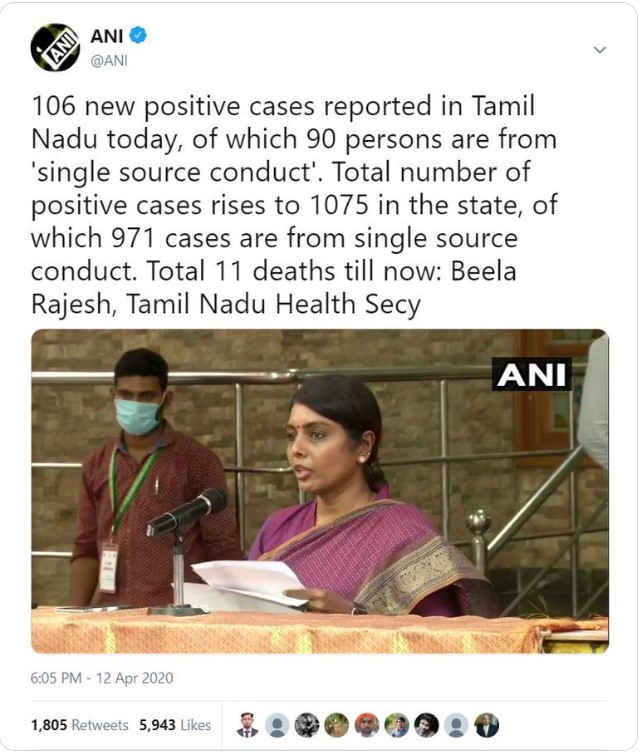 However, the news agency was soon forced to issue a clarification for falsely quoting Rajeesh after many social media users highlighted how the Tamil Nadu health secretary had never used the word ‘single source conduct’ in her daily press briefing. ANI also misreported the numbers of positive cases with travel history.

What nonsense this is ? In the conference nothing was mentioned about single source ! She stated that out of 106, 16 were the source and 90 were contacts of the source. This tweet @ANI is wrong and don’t follow this.
Actual https://t.co/LBVTboJvpo

570+ comments. Most of them are Islamophopic. All thanks to misreport by ANI. TN Health secretary never mentioned about ‘SINGLE SOURCE CONDUCT’. Here’s exactly what @DrBeelaIAS said, “106 positive samples today, out of which, 16 with travel history, and 90 are their contacts” https://t.co/K7VRYw6KzM pic.twitter.com/hLgdOQYlvY

This ANI is completely discredited https://t.co/5Mlpo4tzql

However, by then, the usual suspects of the Hindutva gang had begun quoting the fake news flashed by ANI to attack Muslims.

Janta Ka Reporter had first exclusively reported last week how the Tamil Nadu government had decided to stop making reference to the Nizamuddin Markaz while referring to new coronavirus cases involving the members of the Tablighi Jamaat. This was done primarily to ensure that the Muslim community was not vilified by the Hindutva gang in the country.

ANI was in the news last week after the Noida Police in the BJP-ruled Uttar Pradesh called out its fake reporting on the members of the Tablighi Jamaat in Sector 5. The news agency was forced to delete its tweet and issue a clarification.