KBC host Amitabh Bachchan has left netizens in splits with his latest promotional video of the Sony TV quiz show. Journalists and social media users have declared this as Bachchan’s all-out attack on journalists, who peddled fake news on the presence of nanochips inside the new Rs. 2000 notes. As expected, the KBC host is earning widespread plaudits for his indirect attack on people like Sudhir Chaudhary of Zee News and Sweta Singh of Aaj Tak. 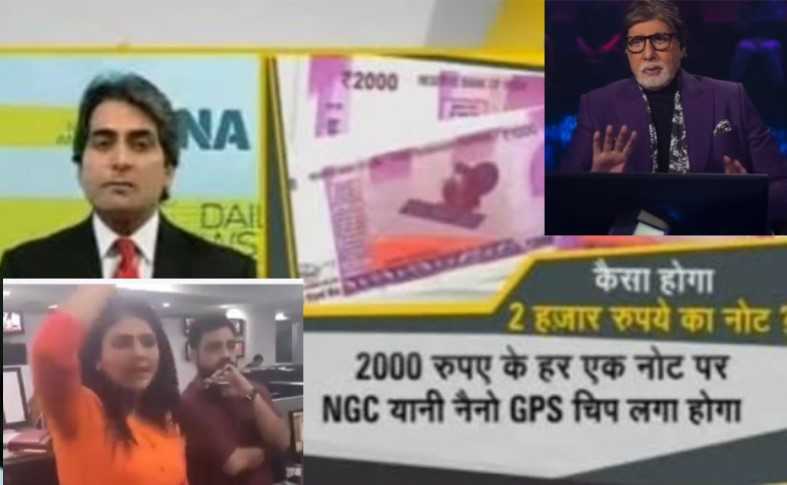 In the new promotional video, Bachchan is seen welcoming a guest named Guddi on the hot seat. He asks, “Which of the following has GPS technology? A, Typewriter. B, Television. C, Sattelite or D, Rs. 2000 note?”

The contestant replies with extraordinary conviction, “Sir D, Rs. 2000 note.” When Bachchan asks if the contestant was sure about her answer, she replies, “Not just me, the whole of India is sure about this.”

Bachchan informs her that her answer was wrong and the correct answer was satellite.

The lady contestant asks the KBC host if he is playing a prank on her. Bachchan replies, “The prank was what you took as a gospel truth.”

The contestant says, “But sir, this is what was shown on the news. So, this is their fault, right?”

Bachchan explains that the fault may be of those, who peddled fake news on the presence of GPS nanochips in Rs. 2000 notes, but she has suffered the financial loss.

Addressing the viewers, Bachchan explains, “Did you just see ladies and gentlemen? You must grab the knowledge wherever you get it from. But before grasping, you must fact-check that knowledge.”

Prime Minister Narendra Modi’s announcement on demonetisation of Rs 500 and Rs 1000 on 8 November 2016 had caused ripples across India as people thronged to ATMs, petrol pumps and grocery shops in their desperation to use as much of their unused old cash as possible.

While, Modi faced condemnation for his shocking decision, his supporters in the Indian media had taken it upon themselves to call the decision a ‘masterstroke.’

Awestruck by Modi’s supposed ‘masterstroke,’ Zee News anchor Sudhir Chaudhary had gone a step ahead to announce how the new Rs 2000 note will have a secret chip, which will help the central government agencies to trace the note even when it was buried under 120 meters.

The story propogated by Zee News was fake as firmly denied by the then Finance Minister Late Arun Jaitley and an RBI official.

Days later, Sweta Singh of Aaj Tak had outsmarted Chaudhary in amplifying a similar claim. In a viral video, Singh was seen confidently educating her Aaj Tak colleagues about the latest innovation related to Rs 2,000 note.

Singh had told her ‘audience,’ “…There are three things we know (on nano GPS chip in Rs 2,000). The new note has nano technology GPS. If there are too many notes lying together at one place, then not only will the law enforcing agencies be alerted about it but even the Income Tax department will receive a signal. Because the note will transmit a signal directly to satellite, which will reach there so that the money can be recovered.”

No wonder, Sony TV’s latest video has prompted netizens to applaud Bachchan for making a powerful statement against fake news peddlers in India.

Many fans said that they had now forgiven Bachchan for his past silence on burning social issues such as the rising intolerance and the cost of living becoming increasingly expensive.