It was not only Times Now’s Navika Kumar, who had to face the music from angry netizens for her insensitive tweet against poor victims of Jahangirpuri. Aaj Tak’s Anjana Om Kashyap too is now being called a ‘sadist’ as the video of her riding a bulldozer in Jahangirpuri went viral. The controversial TV anchor is also facing public ridicule after she was seen discontinuing her interview upon learning that the BJP administration’s demolition drive in Delhi’s Jahangirpuri had also included Hindus. 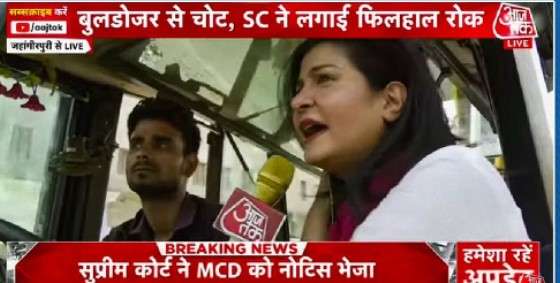 In a viral video shared by netizens, Kashyap was seen asking the driver of a bulldozer if she could also ride the JCB machine during the demolition of properties owned by poor in the area.

Her lines and tone suggested as if she was a part of the BJP-run administration and not a journalist, present on the ground to report the event objectively.

The same video showed Kashyap interacting with a group of people, who were kept behind a barricade. One of them introduced him as Sonu, a Hindu. He said, “Madam, I am a Hindu. We Hindus and Muslims live in harmony here. Our livelihood is destroyed now.”

Kashyap decided to discontinue her interview by saying, “yahan se chalna padega. police hamein hatne keliye kah rahi hai. (We have to move from here. Police are asking us to move).”

As expected, Kashyap began to face grief from Twitter users, who took potshots at her style of journalism.

What is Anjana Om Kashyap gloating about? Sick!

If your high of the day is riding an excavator that is demolishing homes and livelihoods of the poor, you must be a rotten soul.

Why the heck does #AnjanaOmKashyap go live ?
Hasn't she not experienced getting so badly snubbed before ? pic.twitter.com/XIyAK2loBF

This came on a day when Time Now’s Navika Kumar faced widespread anger from netizens for sharing laughter emojis, seemingly in celebration of the financial ruin caused to poor residents of Jahangirpuri.

Last year, Kashyap had to face public embarrassment after she was snubbed by an Indian diplomat in the US during a LIVE broadcast.