A video of a Maharashtra BJP leader being slapped by supporters of the Nationalist Congress Party for a social media post against Sharad Pawar has gone viral on social media, evoking angry reactions. This came hours after Marathi actress Ketaki Chitale was sent to police custody till 18 May for a Facebook post against NCP supreme Pawar. 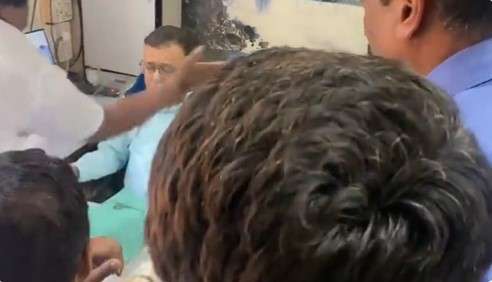 Sharing the video of the violent act, Maharashtra BJP President Chandrakant Patil wrote, “Maharashtra Pradesh Bharatiya Janata Party spokesperson Pro. Vinayak Ambekar has been attacked by NCP goons and on behalf of BJP, I strongly condemn this attack. These NCP goons must be dealt with immediately!”

“The battle of thoughts must be fought by thoughts… In the forthcoming elections, the people will teach them the right lesson by removing the air from the heads of those in power,” Patil added.

In the video, a group of men, reportedly belonging to the NCP, were seen arguing with Ambekar, who was left stunned after one man slapped him on his face.

The development took place hours after Ketaki was arrested by the crime branch of the Thane Police for sharing a Facebook post against Pawar. NCP supporters ahd thrown ink at her when she produced before a police station. The Marathi actress was sent to police custody till 18 May on Saturday.