Delhi Chief Minister Arvind Kejriwal on Sunday expressed his ‘grief’ over the murder of Sidhu Moosewala saying that he was shocked Punjabi singer’s killing. However, his party, the AAP, was publicly celebrating the withdrawal of Moosewala’s security cover. 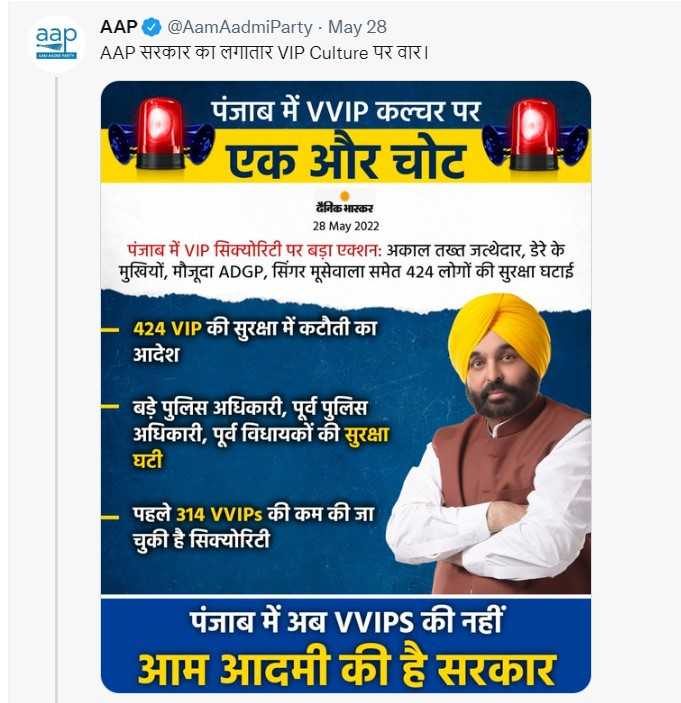 Reacting to the news of Moosewala’s murder, Kejriwal tweeted, “The murder of Sidhu Musewala is very sad and shocking. I just spoke to Punjab CM Man Sahib. The culprits will be given the harshest punishment. I request everyone to keep calm and maintain peace. May God rest his soul.”

His AAP colleague and Punjab Chief Minister Bhagwant Mann had said, “I am Shocked and Deeply saddened by the gruesome murder of Siddhu Moosewala. Nobody involved will be spared. My thoughts and prayers are with his family and his fans across the world. I appeal everyone to stay calm.”

Moosewala’s murder had come hours after the Punjab government withdrew his security cover. Punjab’s ruling Aam Aadmi Party had shared a celebratory tweet on 28 May. The poster shared by AAP had Mann’s photo and read, “One more blow to the VIP culture in Punjab. A big action on the VIP security in Punjab. Security reduced for Akal Takht Jathedar, Heads of Deras, current ADGP, singer Moosewala.”

The poster further read,” Punjab now has a government by Aam Aadmi Party and not the VVIPs.”

As expected, Kejriwal’s detractors are now attacking the AAP chief for hypocrisy.

Moosewala had joined the Congres before this year’s assembly polls and contested from the Mansa assembly seat. He had lost to Vijay Singla of the AAP.