Janta Ka Reporter 2.0
Home Business “Only If it was Gautam Adani or Mukesh Ambani” : Subramanian Swamy...

Supporters of BJP’s Rajya Sabha MP Subramanian Swamy have reacted in dismay after the Tata Group finally acquired control of Air India. Tata Sons chief Ratan Tata, who has often faced the ‘Rotten Tata’ jibe from Swamy, could not express his excitement as he took to social media to welcome the transfer of control of the government-owned airline. Meanwhile, Swamy’s supporters are wondering if the reaction to the Air India deal on social media would have been different if the Narendra Modi government had handed the control of the national carrier to Gautam Adani or Mukesh Ambani. 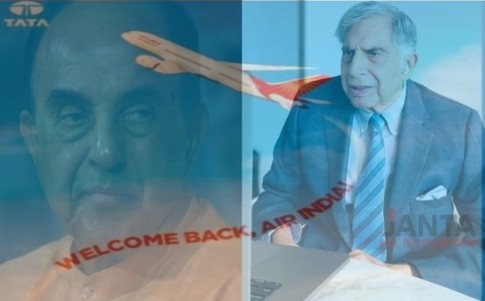 Reacting to the news of the formal transfer of power, Ratan Tata shared a social media post of his company on Instagram. The post contained a flying image of Air India with a caption that read, “Welcome back Air India.”

Air India was originally known as Tata Airlines before the Indian government took control of the company in 1953, six years after the country’s independence from British rule. JRD Tata, however, remained its chairman until 1977.

India’s Civil Aviation Minister Jyotiraditya Scindia too expressed his joy over the transfer of control of Air India from the government to the Tatas. Scindia tweeted, “It is indeed noteworthy that the disinvestment process of @airindiain has been brought to a successful conclusion in a time-bound manner. This proves the govt’s ability, and the resolve to carry out disinvestment effectively in non-strategic sectors in the future.”

His subsequent tweet read, “Best wishes to the new owners. I am confident that the airline will bloom under their wings, and pave the way for a thriving & robust civil aviation industry in India.”

A statement from the Indian finance ministry said, “The Air India strategic disinvestment transaction has been completed today with Government receiving a consideration of Rs 2,700 crore from the Strategic Partner (M/s Talace Pvt Ltd, a wholly owned subsidiary of M/s Tata Sons Pvt Ltd), retaining debt of Rs 15,300 crore in Air India and AIXL and transferring shares of Air India (100% shares of Air India and its subsidiary AIXL and 50% shares of AISATS) to the Strategic Partner.”

Swamy had vociferously opposed the government’s decision to hand over the control of Air India to the Tatas. The outspoken BJP parliamentarian had launched a personal attack on Ratan Tata by calling him ‘Rotten Tata.’ “J.R.D.TATA was given compensation &JRD agreed to remain Chairman of Air India for several years. Rotten Tata, is son of adopted Naval. RT has been in losses in most of Tata companies. He has pushed out able executives. Air Asia in which RT has majority shares is in a mess,” Swamy had written.

Swamy’s supporters have now taken to social media to register their outrage. His critics also decided to use the opportunity to mock the controversial BJP MP.

I have to hand it to Tata. Their funding of TISS & deep influence on various parts of media made sure that nothing was done to block AI sale. Only Swamy tried & failed. If it was Adani or Ambani, the Modi ne desh bech diya crescendo &P ILs in SC wud have blocked the deal by now

Someone please send this pic to SuSu Xiaomi Swamy along with Burnol & Gaviscon!
C’mon Swombies, do your thing! #AirIndia #Tata https://t.co/i2SaPDLhni

Air India finally with TATA
No amount of blackmailing by शेखचिल्ली Swamy worked.

Couldn’t have been a better slap to @Swamy39 @vhsindia

Swamy had later approached the Delhi High Court against the deal but had to face disappointment after his Public Interest Litigation was dismissed by the division bench of Chief Justice DN Patel and Justice Jyoti Singh earlier this month.