Janta Ka Reporter 2.0
Home India Assam Here’s why Ratan Tata excuses himself from not speaking in Hindi in...

Industrialist Ratan Tata has been trending on the internet after a video of a speech from Assam went viral. In the viral video, the renowned industrialist was seen excusing himself from speaking in Hindi in the presence of Prime Minister Narendra Modi while laying the foundation stone of several new cancer hospitals in Assam. 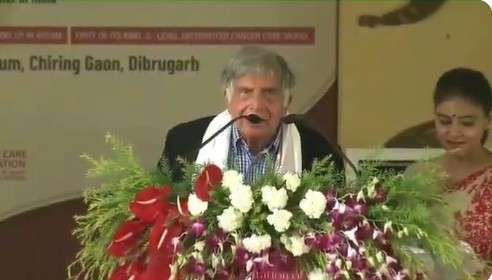 The octogenarian industrialist said, “It really is a day that cancer, which is not a rich man’s disease, is being equipped to serve and treat the millions of people that are inflicted.”

Industrialist #RatanTata addresses a Program for the foundation stone-laying and dedication of Cancer Hospitals in #Assam. pic.twitter.com/lLoHXwhMwu

Although Tata said that he could not speak in Hindi, he ended his speech by making a brief speech in Hindi as he said, “Today is an important day in the history of Assam. Today Assam can tell the world that facility for cancer treatment which was earlier not available in a small state of India is being brought here.”

This was after PM Modi dedicated six cancer hospitals in Assam to the nation at a function in Dibrugarh on Thursday. These cancer hospitals are built at Dibrugarh, Kokrajhar, Barpeta, Darrang, Tezpur, Lakhimpur, and Jorhat. Dibrugarh Hospital was dedicated to nation by the Prime Minister earlier in the day when he visited the premises of the new hospital. PM Modi also laid the foundation stone of seven new cancer hospitals at Dhubri, Nalbari, Goalpara, Nagaon, Sivasagar, Tinsukia and Golaghat.

Meanwhile, netizens have been thanking Ratan Tata for his contribution to India.

#RatanTata sir is kohinoor of this beautiful country and I'm proud that I'm Indian.thank you dear sir for always being my mentor and my motivation ???? pic.twitter.com/RIwM6z95R3

Sir Ratan Tata, the name is enough. I will always remember Ratan Tata sir for his contribution towards Nation Building. What thing comes to your mind when you hear the name : Ratan Tata? #RatanTata #Assam #Cancer pic.twitter.com/yGKbrkQn4Q

What is the world most priceless thing?

Honourable #RatanTata Sir, My heartfelt regards to you and your organization for establishing tier 2 and tier 3 cancer institutes in Assam. With this every sections of our people who are suffering from cancer will be benefitted (both treatment wise or financially) pic.twitter.com/pSGtR6iPac