Netizens have begun to intensely debate the decision by Joe Biden to exclude Indian-Americans with BJP/RSS link from his new administration. The Biden-Harris administration has so far decided to snub almost all known faces, sympathetic to the BJP and the RSS, from their new team. Some analysts are of the opinion that the exclusion of Obama administration staffer Sonal Shah and Amit Jani, (who worked on the Biden campaign team) may be linked to their association with the BJP and the RSS. Noteworthy are the public utterances of both Biden and his deputy, Kamala Harris, that amply display an indication to exclude them from the new administration. 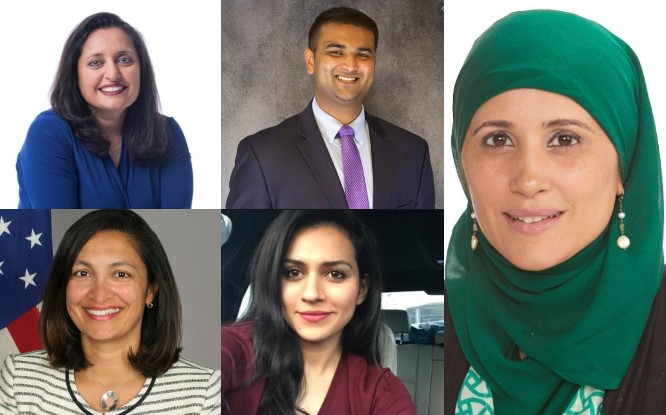 Biden’s new team includes three Kashmiri origin women namely diplomat Uzra Zeya, Samira Fazili and Aisha Shah in key positions. Zeya, who, according to The Tribune, had played a role in the Devyani Khobragade case in 2013, has been nominated to be Under Secretary for Civilian Security, Democracy, and Human Rights. She had quit the foreign service in 2018 in protest against the policies of the then President Donald Trump.

The hijab-clad Fazili had famously taken part in protest rallies in the US against the anti-Muslim Citizenship Amendment Act passed by the Narendra Modi government in India, the NRC and the Kashmir lockdown after the abrogation of Article 370. She has been named as the new Deputy Director of the National Economic Council at the White House.

In contrast, both Sonal Shah and Amit Jani have found no favours with the Biden administration despite their years of loyalty. Sonal Shah, according to The Tribune, served on Biden’s unity task force while her father was the president of Overseas Friends of BJP-USA and is the founder of RSS-run Ekal Vidyalaya. She too reportedly raised funds for Ekal Vidyalaya in the past.

Jani was re-appointed as National Asian American and Pacific Islander Director by the Biden campaign team in the run-up to the election even after it was pointed out that his family had ties with PM Modi and other BJP leaders. However, the Biden administration now concedes that his appointment may have been due to lax vetting.

Indian-American journalist, Sadanand Dhume wrote on Twitter, “This story claiming that Biden is shunning Democrats seen to have links with the RSS strikes me as premature. Many important positions remain unannounced. But it’s certainly likely that the BJP’s domestic agenda will harm some Indian-American careers.”

Dhume is not wrong given that both Biden and Harris have repeatedly voiced their concerns on the divisive politics pushed forward by the Narendra Modi government against religious minorities in India. In his Agenda for Muslim-American Communities, Biden had explicitly condemned the measures that the government of India took ‘with the implementation and aftermath of the National Register of Citizens in Assam and the passage of the Citizenship Amendment Act into law.’ He had called them ‘inconsistent with the country’s long tradition of secularism and with sustaining a multi-ethnic and multi-religious democracy.’

The Biden-Harris administration has been vocal against the human rights violations under the BJP government headed by Modi. “In Kashmir, the Indian government should take all necessary steps to restore rights for all the people of Kashmir.  Restrictions on dissent, such as preventing peaceful protests or shutting or slowing down the Internet, weaken democracy,” said Biden’s campaign website.

Harris, herself with Indian links, has been more outspoken on the thorny issue of Kashmir than her boss. When Kashmiri Muslims were forced to live in brutal lockdown following the abrogation of Article 370 in August 2019, Harris had famously assured Kashmiris that they were not alone. “We have to remind Kashmiris that they are not alone in the world,” she was quoted by TIME in October 2019. This was when she was still trying to win support from her party members in the Democratic primaries. She had said, “There is a need to intervene if the situation demands.”

While PM Modi was quick to congratulate Biden after the latter was sworn in as 46th President of the United States, the latter is yet to respond to the series of tweets posted by the Indian premier. Also going against Modi and his party is the former’s open support for Trump in 2019 at a rally in the US. Modi had come under flak for proclaiming Abki Bar Trump Sarkar (This time, we want a Trump government). This was largely seen as a spectacular diplomatic disaster by Modi given the perception of Trump as someone who routinely practiced, professed and propagated prejudice and hate.

Biden built his campaign on the basis of providing a ‘healing touch’ to Americans and ending the politics of hate in his country. It seems that he’s realised that including Indian-Americans with the BJP/RSS links would prove to be counter-productive in his desire to achieve a hate-free America.